Dominique Somers’ work 00A consists of a remarkable compilation of found images. The title of the series refers to the starting-point markings printed between the sprocket holes on the leader of a 35-mm photographic film. Somers has been collecting the first, automatic exposures made on this 00A frame of the negative strip for years. They are the result of a photographic practice that in today’s digital age has almost become a form of archaeology: when positioning a roll of analogue film in the camera, one has to release the shutter a few times and wind a couple of frames forward to reach the starting position (1A) of the unexposed part of the spooled film. It is precisely these throwaway shots, made while loading the camera before the real work begins, that Somers has appropriated.
The 00A image is given, not made. It is the antipode of the naïve, redundant photography of amateurs and journalists, the users of 35-mm cameras. As a series, 00A investigates the boundaries of the technical and conceptual identity of photography.

The publication 00A, published by Art Paper Editions, will be presented to the public on January 17, 2016 at S.M.A.K. Ghent (Jan Hoetplein 1, Gent). Dominique Somers is a researcher at the School of Arts of University College Ghent. 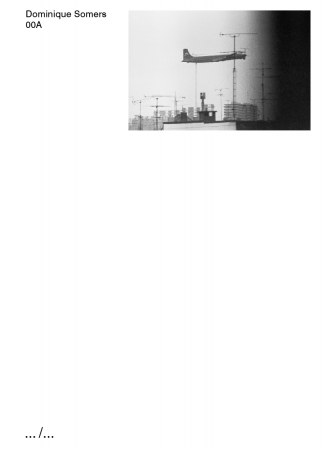