'Thing 001928 (Give Up Yer Aul Sins)' concerns a conflict between Pauline Gormley and EMI Records around a recording of bible stories told by children from Dublin. The tape recordings were made during Peig Cunningham's class for first communion, which Pauline Gormley attended when she was a six-year-old child. EMI used the recording without noticing the children for a CD introduced by Father Brian D'Arcy. During the court case, Pauline Gormley v. EMI on November 17, 1998, judge Barron at the Irish Supreme Court had to decide if Pauline Gormley’s recounting of the bible story 'And then there were twelve' as a child in class was sufficiently original to be protected as a work of art.

We will collectively read fragments of the Irish court case reports. The purpose of this gathering is to revisit the moment of hesitation during the court case and to actualize the problem discussed in the case as a way to fabulate. Lucia Alonso (child), Mette Edvardsen (performer), Jan Masschelein (researcher on education) Dirk Vervenne (legal adviser) a.o. are invited by Agency in order to resonate. 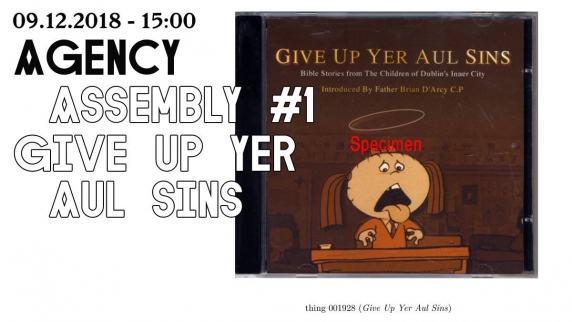