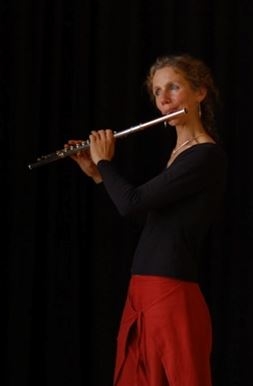 The Belgian flautist Myriam Graulus studied at the Royal Conservatory of The Hague, (Holland) where she obtained the master degree. In 2009, Myriam Graulus obtained a master degree in contemporary music with the highest distinction at the Conservatory of Amsterdam.
She then spent 3 years in Latin America where she taught at the Conservatorio Nacional de Quito (Ecuador) and gave numerous concerts both as soloist and as chamber musician. She performed concertos with the National Orchestra and participated to the Latin American Flute Festival and the Ecuadorian Contemporary Music Festival.
She was an active member of 'Live Music Now' production, which aimed to share music with under-privileged audiences at jails, hospitals and old people's homes in Belgium., where she particularly enjoys the contact with public from all socio cultural origins.
Between 1991 and 1995 she held the position of principal flute in various orchestras such as the Residentie Orkest in The Hague, the Filharmonisch Radio Hilversum, I Fiaminghi, and the Philharmonic of Flanders.
Since 2013 she is currently playing with Duo Les Heureux Moments and more recently with ‘Ensemble Vibrations’.
She was a member of groups such as Musique Nouvelle, Zeitklank and Q-O2, with whom she recorded (Manfred Werner), created new works and played in Europe and in festivals like Ars Musica (Brussels), Musica Sacra (Maastricht) and Impuls Festival (Graz).
She has worked with dance company ‘Antonino & Kaiser’ from Duisburg in the production ‘Wald Variationen’.
She serves as a jury in flute contests and she regularly gives master classes and concerts at Conservatories all over the world.