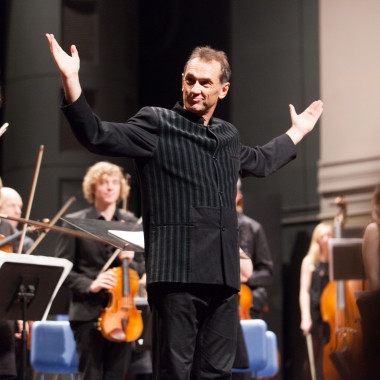 Geert Soenen, son of composer Willy Soenen, started his musical career as a trumpeter and pianist, but gradually became more and more proficient as a conductor. He studied at the Royal Conservatory of Ghent and later earned his diploma in orchestral conducting at the Royal Conservatory of The Hague. During an internship at the Jeune Philharmonie he attended a masterclass with Iván Fischer, conductor of the Budapest Festival Orchestra, among others, who saw in him "a sensitive, musical temperament".

Geert Soenen has made several creations, recorded for radio and CD and regularly ventures into cross-over projects, but is known for his broad repertoire of symphonic music, oratorios, and especially operas and operettas.

As a regular guest at Ghent's Lyrica concerts, he conducted many operas and operettas, as well as many opera and belcanto concert programmes. He conducted Shostakovich's Tenth Symphony with great succes at concerts in Ghent and Antwerp, for which the orchestras Young Symphonic Ghent and Antwerp of Amaj had joined forces.