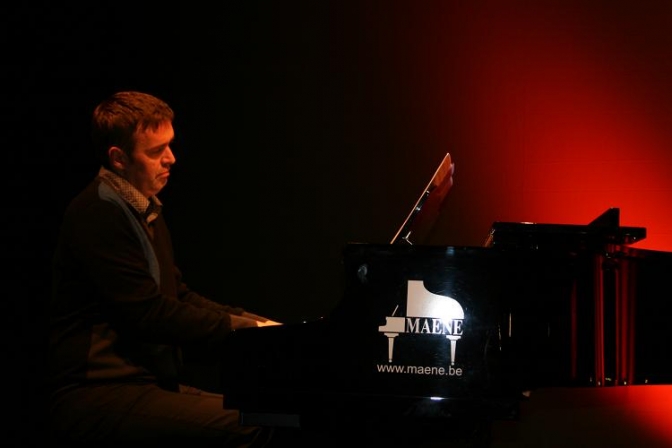 He studied at the Royal Academy of music of Ghent where he took his Higher Piano and Chamber Music Certificate with high distinction. Wanting to broaden his musical knowledge he applied on playing organ, harpsichord and piano forte. He improved himself at the Mozarteum in Salsburg.

He was still very young when he carried off the first prize at the International Contest for Young Musicians (from the Festival of Flanders) and became accompanist at the Royal Academy of music of Ghent. Thanks to his flexibility and his many-sidedness he was in demand by soloists of international reputation like Michael Bezkverny.

He is also a member of several chamber music ensembles, such as the saloon-ensemble Grupetto, a group that specialised in historical thematic reconstructions. Their latest production 'Malene Dietrich, Falling in love again' came on CD and toured the cultural centers of Flanders for two years.

By collaborating on projects like the International Festival of Flanders and various theatre productions (in the theatres Antigone and Arca) he was noticed by the greater producers like Opera Hall, Music Hall and Tabas&CO. As an opera rehearsal tutor and stagemaster he went to Lisbon, Madrid, Barcelona, Munich and Cologne for performances of Aida, Carmen, Nabucco, La Boheme and La Traviata.

Stage-director Frank Van Laecke called on him for his successful musical Kuifje (Tabas&Co) and Camelot (Music Hall). As musical conductor with 'De Nieuwe Horizon' he created de musical Camille Claudel that was prized by 'De Morgen' as being the best musical of the year 2002.

His latest CD 'Duo Roosemeyers and friends' proves that he is not only interested in the classical repertoire. With clarinettist Peter Merckx he specialised in folk music, in particular in 'Jewish soul music'. Their recent CD was met with much praise and is often broadcast on radio Klara and Radio 2.